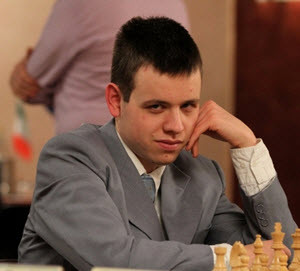 David Navara is a chess Grandmaster living in the Czech Republic. In April 2007, he became the highest ranked Czech player, with an Elo rating of 2710. At this point, he was ranked #14 in the world on the FIDE rating list.

David Navara studied at Univerzita Karlova (Charles University) in Prague and obtained a degree in logic.

David Navara was born in Prague on March 27, 1985. Back then, Prague was a city in Czechoslovakia. Today, Prague is the capital of the Czech Republic.

The first time Navara participated in the World Cup was in 2005, where he was knocked out in the first round by Predrag Nikolic.

In 2007, Navara participated in his second World Cup. He got to the second round, where he was defeated on tiebreaker by Russia’s Sergei Rublevski.